Canadian governments are busy establishing a legal framework where Canadian law becomes subservient to the United Nations ‘ Declaration on the Rights of Indigenous Peoples’, regardless of the wishes of the Canadian people. British Columbia – along with the federal government — are foolishly leading the way in this undermining of Canadian democracy: 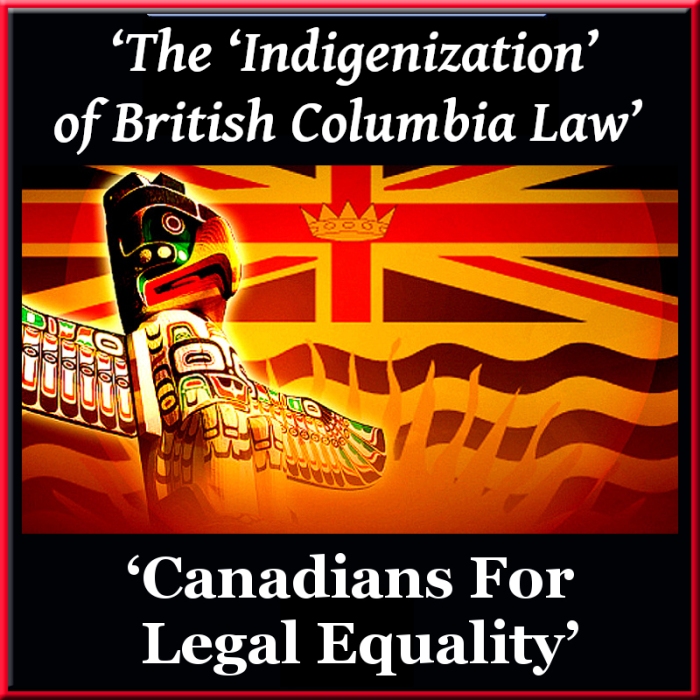 “Overlooked during the NDP’s end-of-session rush to expedite its legislative agenda was a small bill with far-reaching implications. ‘Bill 29’ ran a mere three pages, including cover and explanatory notes.

“It constituted one of the first substantive moves by the government to amend provincial laws to incorporate the ‘principles’ of the United Nations Declaration on the Rights of Indigenous Peoples.

“The amendment in question was to the ‘Interpretation Act’, which provides guidance for the interpretation of laws where the meaning is not clear. ‘Bill 29’ added a clause that said every

“Act and regulation must be construed as being consistent with the Declaration on the ‘Rights of Indigenous Peoples Act’.”

“The latter being the Act whereby two years ago, the legislature unanimously enshrined the 46 articles of the UN Declaration and set in motion an action plan to incorporate them into provincial law.

“The reference to “every act and regulation” made it sound as if the New Democrats were putting the rewrite on the fast track. But it fell to Attorney-General David Eby to explain what the amendment to the ‘Interpretation Act’ does and does not mean.

“It advances the interpretation of the laws of British Columbia in alignment with the declaration, but does not itself incorporate the rights and principles in the UN declaration into the laws of B.C. directly or give it constitutional status”,

“If a court considers a provincial law to be inconsistent with the UN declaration, this amendment does not allow the court to read in, read down or find that law to be of no force or effect”,

“In those cases, it would be up to the government to rewrite the offending law or regulations in consultation with {only} ‘First Nations’ {Aboriginal communities}.

“So much for what it doesn’t do. What it does do is “provide direction on how to resolve ambiguities in the law”, continued the attorney-general.

“It directs those who interpret provincial acts and regulations to interpretations that are consistent with it.”

“careful point that the change is not a constitutional instrument that can be used to strike down laws that are presently on the books and would appear, on their face, to be inconsistent with the UN declaration.”

“Rather, “in those cases, the onus will be there for the government” to bring in amendments to the offending legislation or rewrite the relevant cabinet order, said de Jong.

“The ‘Liberals’, having joined the Greens and New Democrats in supporting the original UNDRIP legislation back in 2019, voiced no opposition to ‘Bill 29’ this time around. On Monday, the bill breezed through second reading or approval in principle with no one voting against.

“Next day, de Jong and Eby revisited the implications of the bill during clause-by-clause debate. It is an important stage, especially when government is venturing into uncharted {and unConstitutional} territory as it is with the UN Declaration.

“Courts have been known to {and should have to} cite statements in the legislature by government ministers as evidence of the intentions of legislation.

“De Jong pressed Eby for examples of how the change could be applied in specific cases.

“The general principle is that the ‘Interpretation Act’ applies to every enactment unless a contrary intention appears”,

“The ‘Interpretation Act’ would instruct the decision-maker to prefer the {Racial} interpretation of public interest that is consistent with the principles of the declaration.”

“Where a piece of legislation contains provisions that are very clear — this legislation doesn’t say to a statutory decision-maker that you must discount the clarity of that legislation, notwithstanding the fact that it is inconsistent with the declaration. That is a job for the legislative assembly to address. Is that an accurate statement?”

“De Jong turned to the example of the disposition of public lands and resources, where the public interest is made paramount but not defined to any extent.

“One of the UNDRIP principles says that

“Indigenous peoples have the right to determine and develop priorities and strategies for the development or use of their lands or territories and other resources.”

“Another obliges government to “obtain their free and informed consent prior to the approval of any project affecting their lands or territories”.

“It strikes me that the decision maker must very much take that language into account”,

“Could the attorney-general “indicate whether he agrees or disagrees”?

“Eby had been answering de Jong to that point and there was no reason to think he would not do so again. But at that moment (6 p.m., Tuesday) the clock ran out on the ruthless time allocation motion that the NDP had adopted earlier in the day to expedite passage of its top-heavy legislative agenda.

“With that, Eby was silenced before he could put on the legislative record an answer to de Jong’s critically important question.

“Instead, the bill was rammed through without further discussion.

“Yet another example of the NDP’s reckless disregard for the basics of the legislative process.”

COMMENT: “Our rights as a Sovereign Nation are being sold out by the radical Left NDP to the 3 countries that have full control of the UN.”

“All people should be treated the same, regardless of colour.”

“I’m all for throwing out UNDRIP entirely.”

“It was a dumb idea by Horgan to force a UN initiative on us.” 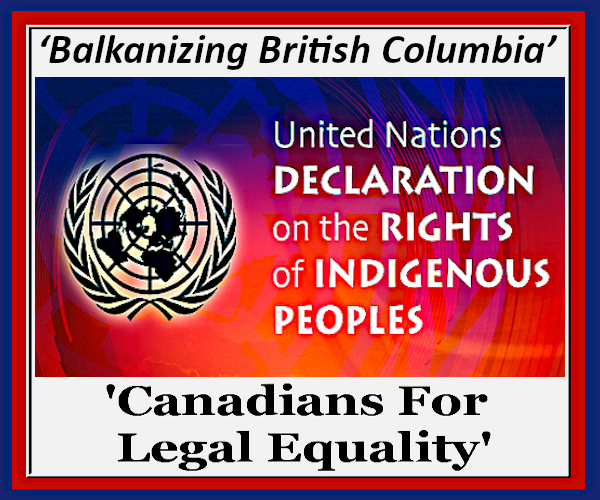 “Horgan told the chiefs his government has a lot of work ahead {!}, to adapt provincial legislation {to segregate British Columbia} to the dozens of articles of the UN declaration {Some of which are CONTRARY to the Canadian Constitution}…”

“As throne speech commitments go, not many over the years have been more fraught with consequences for B.C. than the one proclaimed by the John Horgan N‘D’P government. B.C. will be the first province in Canada to introduce legislation to implement the United Nations Declaration on the ‘Rights’ of ‘Indigenous’ People”, it read in part:

“mandating government to bring provincial laws and policies into harmony with the declaration.” 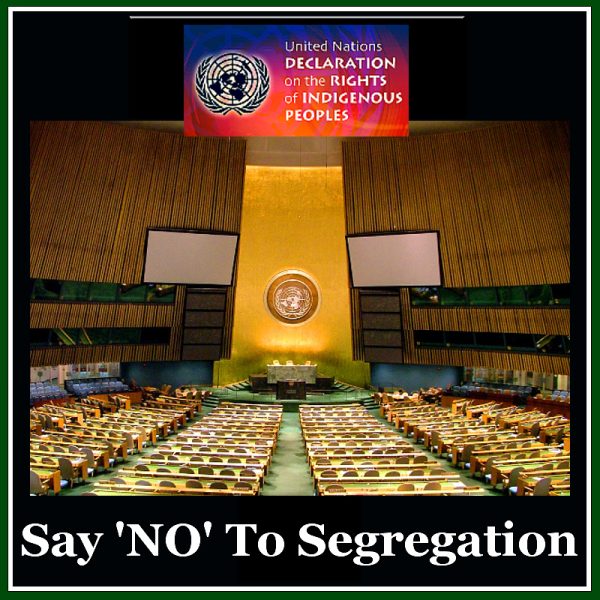 “Even for a government with a disproportionate Aboriginal influence, implementing the foolish ‘United Nations Declaration on the Rights of {so-called} ‘Indigenous peoples’ is proving to be a political and economic impossibility.”

“Jody Wilson-Raybould, the justice minister, spoke at the A’FN’s general assembly in Niagara Falls where she dropped the bombshell that adopting the ‘United Nations Declaration on the Rights of Indigenous Peoples’ is “unworkable”…” 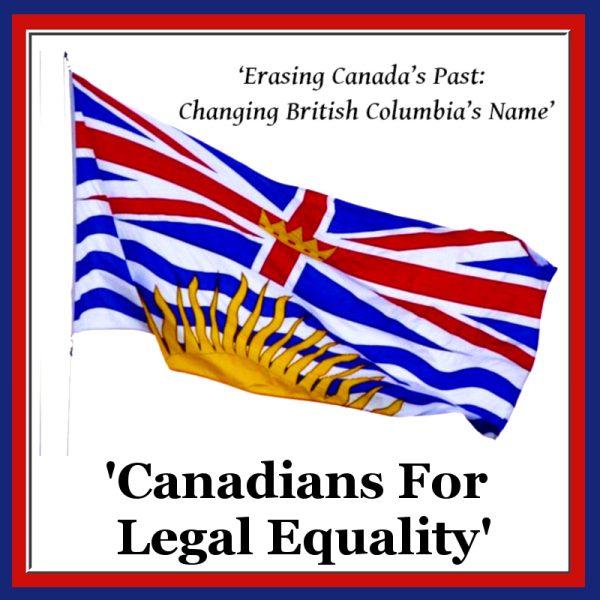 “The ‘Village of Pemberton’ recently voted to change the name of British Columbia. They have no idea to what, only that it should change. Pemberton councillors also put forward a motion at the ‘Lower Mainland Local Government Association’s annual general meeting. They want the province’s name sent down some Orwellian memory hole. The motion failed, garnering 40%, but that’s hardly a resounding defeat. Expect the issue to arise again, courtesy of the anti-historical revisionists…”

From the rest of Canada:

Lawyers are generating a fortune in profits as the crucial part of the divisive Aboriginal Industry. Here, they are just ensuring that everybody is on the same page:

“The Law Society of Alberta Board (also known as ‘Benchers’) approved the introduction of mandatory ‘Indigenous’ {sic, they mean ‘Aboriginal’. Off to a bad start!} ‘Cultural Competency’ training for all active Alberta lawyers beginning in early 2021…”

The irony in this is that far more aboriginals listed themselves in the 2011 Census as ‘Christian’ than as ‘traditional spirituality’. So, this is simply tokenism catering to a minority of traditionalists:

“We have repeatedly pointed out that the contemporary billion-dollar Aboriginal Industry is the creation of a Canadian legal profession that, coincidentally, happens to be the chief beneficiary of the expansion of Race-based differential treatment in law. To the detriment of Canada’s future, Canadian law schools seem to be gearing up for unlimited expansion of this discrimination-based legal gravy train…”