Here’s a chance for a judge to act responsibly – while throwing this out of court, give these children a lecture on wasting the court’s time. Their lawyers are attempting to use the ‘social justice’ Section 15(2) of the Charter {see below} which undermines the ‘equality rights’ supposedly guaranteed in Section 15(1). P.S. Once again, in what’s become an ongoing pattern, American interference is involved… 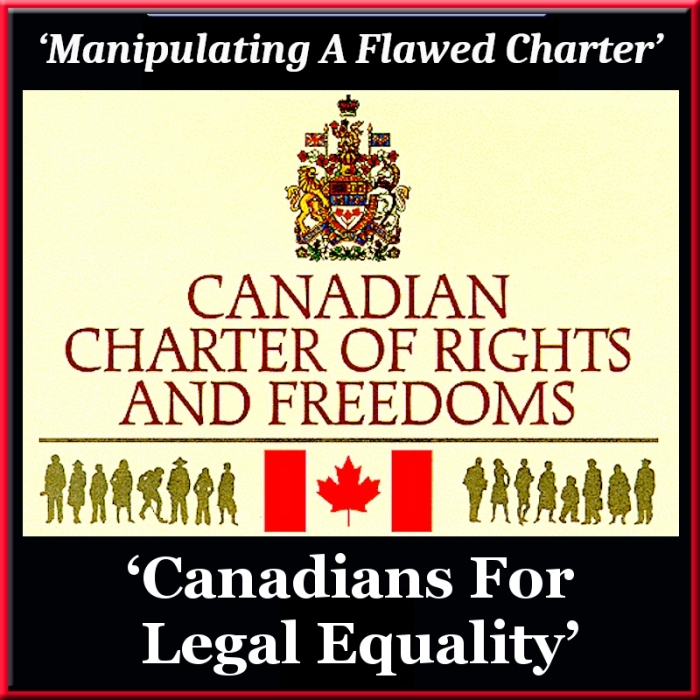 “The ‘David Suzuki Foundation’, which is acting as a partner in the case {of course}, outlined in a news release the general arguments in the case being filed by 15 youths who allege they have suffered “specific” injuries due to climate change. It calls on Ottawa to stop conduct that violates their ‘charter rights’ {?}… The news release does not explain the injuries and no one involved in the lawsuit would comment before it is filed with the Federal Court…

Now, check out this pathetic excuse for hearing the case based on our flawed and dangerous ‘Charter’:
“Lorraine Weinrib, a constitutional law professor at the University of Toronto, said the case being filed at the Federal Court could have an interesting argument if all of the youths are minors.

“Under the equality clause, which is one of the elements being argued, the court pays attention to people who are politically powerless. And, of course, young people can’t vote”,

she said. The equality rights argument could also be successful, she said, because there is an understanding that government can’t intentionally or by effect act in a way that disadvantages people who are already disadvantaged, such as people without voting rights.

“But lawyers will face a major hurdle in compelling Ottawa to implement higher cuts to greenhouse gases, she said. It’s more common for lawyers to win charter arguments that require the government to refrain from acting in a certain way, Weinrib said.

“The original design of the charter by prime minister Pierre Trudeau was to include some positive rights and to obligate certain kinds of distribution of wealth but that didn’t survive to the final negotiation.”

{This was Trudeau’s devious, undemocratic attempt to force a more socialistic way of life on Canada…}

“Under Canada’s democratic system, those kinds of “positive duties” or actions are traditionally achieved in the political realm through party platforms rather than court orders, which makes it interesting to see it appear in this case, she said.

{Yes, although our courts have already undermined this democratic principle by ‘do-gooder’ racist rulings on aboriginal rights, several of which ‘order’ the government to take actions…}

“This is a legal proceeding that isn’t likely to be successful in terms of securing a victory on the legal submissions that are being made, but I think that it will be a very, very important case to bring the facts and the arguments to a different forum”,
Weinrib said.

{In other words, this isn’t about legalities, but about using the Court to publicize a political cause – an excellent reason for tossing this out of court…}

“She said the team behind the young plaintiffs is robust and includes, among others, the law firm of Joseph Arvay, one of Canada’s leading constitutional lawyers.

“‘Our Children’s Trust’, which launched a similar case against the United States government, is providing technical support…”

COMMENTS: “They want to sue OUR Government over climate change. What they should be doing is going to China and/or India, for example, where a majority of what their concern is and try their childish actions there.”
^^^^^^^^^
“Brain damage is the newest symptom from climate change.”
^^^^^^^^^
“So… now we have the eco-activists taking advantage of young adults. Have these lawyers sat down with these ‘kids’ and explained to them that the government is not a private entity…? That they, themselves, are actually the government and that any costs incurred by the governent will eventually be paid by them? If this is an example of what our education systems are putting out, Canada is in really big trouble…”
^^^^^^^^^
“So kids under 18 can commit a crime and can’t be held responsible for it because they are to young to know right from wrong, but they can lecture and sue the government over things they don’t have all the facts on… CRAZY.”

See also:
‘The Strange Case of Canadian ‘Legal Equality’ (Charter Section 15) {March 8, 2016}:
“The political — and therefore, ‘flexible’ — tool that is subsection (2) means that the Constitutional Principle of Section 15(1) cannot really exist as a ‘Principle’, and merely serves as an inspirational introduction to the court-driven social engineering enabled by subsection (2).

“As a result, legal equality of individual Canadian citizens has become a thing of the past…”
https://canadiansforlegalequality.wordpress.com/2016/03/08/the-strange-case-of-canadian-legal-equality/

Join us in the future of a unified Canada